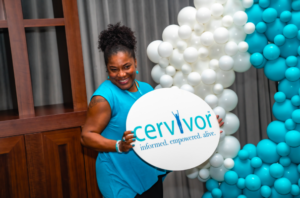 How my story begins: My story began with experiencing abnormal pap smears after the birth of my daughter in 1997. I suffered extremely heavy periods that would last for weeks at a time. It caused my hemoglobin to drop to very low levels. I went to several doctors over several years. They put me on iron pills, birth control pills to help regulate my cycle, and wanted me to take steroids. (I refused this one.) I recall going to the hospital in pain and they did a brief exam on me, sent me home and told me to follow up with my doctor if the pain continued. (This is what happens when you have no insurance.) I went home and tried to lay down. I remember screaming to my daughter to call my friend to come back to the house to help. The pain was so intense, tried to get up and there was blood - so I sat at the end of the bed and could not hold my head up. After returning to the hospital, I was told that it was an ovarian cyst that had ruptured. It took me moving to Jacksonville, FL in 2011 to discover what had been causing all my health issues..... Cervical cancer!

Life before my diagnosis: My life before my initial diagnosis was filled with spontaneous traveling and living life to the fullest daily. I was the type to wake up and say "let's ride to Dallas to visit the city." I loved to hit the highway and spend time with my friends and family. I would have days that I did not feel well, but I endured it and pressed through it.

How I felt after diagnosis: I felt very upset after my diagnosis. I wish I had listened to my first mind when I first started feeling bad. I experienced pain after sex, bleeding after intercourse and pelvic pains.... I wish I had pressed the doctors to do more for me, rather than push me off on someone else. I also wish I had know about cervical cancer sooner. I wish I had known about the symptoms and that is was preventable. I was clueless about HPV! I had to get my mindset together because I had to be here for my daughter and son. I have nieces, nephews and siblings whom I adore that I could not imagine being without. The fight was on and giving up was not an option!

Telling my family and friends: Telling my friends and family was the most difficult thing for me. I had moved to a new state and my closest relative was 2 hours away. I had only been in Jacksonville for about 6 months. I was separated from my husband and my ex was also fighting me for full custody due to my decision to relocate to Florida. I knew if he found out about my cancer, he would use it against me. I am forever grateful for my best friend encouraging me when I felt lost. I did not want my son to know his Mommy was sick and worry about me. So, I was silent during my battle. I only allowed a few people to know and it was the hardest decision ever!! I did not know what life with cancer would be like. However I had to defeat not just cancer, but the court system as well. I finally had to tell my manager and she was so understanding along with my amazing co-workers. She allowed me to switch my schedule around when needed and she referred me to Mayo Hospital. When I told my daughter about my diagnosis, she replied, "Mommy, are you going to die?" I tried not to cry but looking at her face as tears poured down her precious cheeks tears immediately filled my eyes with tears too. We were on the road heading back from Alabama and we had time to chat with no interruptions. She was such a big girl during everything and kept me encouraged daily!

My treatment: I initially thought they would tell me that I had to have a hysterectomy, but instead I had a conization biopsy. I already had 2 kids and if it meant taking everything out to save my life, I was alright with it.

How I felt after treatment: I felt relieved after a few weeks. I had so much going on and I was finally able to exhale with a sense of comfort knowing that I will get through this battle. I had crossed one hurdle and still had a major victory to accomplish with my son. It took me awhile to fully comprehend all that had taken place in such a short time. I was thankful that my sister was able to be with me during my testing and my mother for my procedure.

What was most difficult for me: The most difficult for me was keeping it from my son while I fought to get back healthy and fight for custody at the same time. Fighting in silence was so hard, but I knew it was the best option at the time. I had enough stress and did not want more negativity in my life. I knew my son needed me to fight for him. My daughter made sure she was there to help me stay strong!

What I did to help myself: Throughout my battle, I remained positive and had wonderful friends and family to surround me. I read a lot about cervical cancer and HPV. I researched support groups and decided to take on social media as an outlet to bring awareness about what I had went through with this cancer. I created 2Fab4Cancer and my silence broke about cervical cancer. I wanted to be a voice for gynecologic cancers.

Where I am today: Today, I am living a cancer free life! My son's primary residence is with me. I've seen my daughter graduate high school, enter into college and move to Las Vegas. I look forward to seeing my son walk across the stage next year and enter into college. I have been an advocate for cervical cancer and made it to my first Cervivor School in Chicago in 2019. It really changed my life! To meet so many women who can relate to my story and genuinely understand was beyond anything I could've imagined in my life! I love to talk about "below the belt cancers" now. Most importantly, I am healthy and enjoying my life. I am back to traveling as well!

What I want other women to know: I want other women to know that they are not alone. We live in a world where you can reach out to anyone with a click of a finger. I've talked to women all over the world and it feel so good knowing that I am spreading awareness about cervical cancer and HPV. We have to put an end to the stigma behind cervical cancer/HPV. I was so inspired when I found Cervivor. I went to Cervivor School and discovered: "No more fear. No more shame. No more confusion. No more whispering. No more suffering. No more women dying. CERVIVOR IS HERE! We understand. We’ve been through it. We are going through it. We are your support. We are a sisterhood. We are your educators and your advocates. We are voices that roar instead of whisper. We are a movement to end cervical cancer. We are here for you." I want each of you to know this type of support!!!

How I will try to help others: I want to help families that have loved ones battling cancer and who do not know what to say or what to do for them. I want to offer my support and to let them know that no one is in this fight alone. I was silent but, now, no more silence! I have friends that have passed due to cancer, one of my sisters lost her mother to cancer, my oldest sister lost one of her best friends to cancer and, most recently, we buried my aunt due to cancer. So, my drive to help others with educating them about cancer awareness is dear to my heart. I will start by sharing my story!