There are lots of things about cervical cancer and HPV that the public doesn’t know and understand, things I didn’t know about before I was diagnosed. I strongly feel that if people understood what cervical cancer treatment “looks” like and the long-term side effects of treatment, women would be lined up to get Pap and HPV tests and parents would be running to get their girls and boys vaccinated. When I was diagnosed with cervical cancer in 2016, I had friends and even a nurse say to me, “Well, at least you got the easy cancer. You can probably have a hysterectomy and be fine.” There is so much wrong with this statement that it’s hard to know where to begin. It is true that an individual’s treatment plan could consist of a radical hysterectomy. The implication that any cervical cancer treatment is easy and has no significant impact on women is hurtful and untrue. Further, treatment often consists of many more procedures such as chemotherapy and radiation. These treatment procedures are often damaging to the entire pelvis and leave life long side effects. 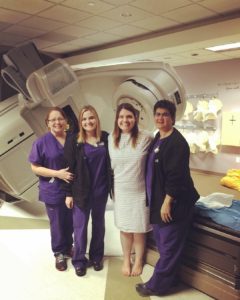 One of the treatments with significant life altering side effects is brachytherapy, or internal radiation, sometimes referred to as HDR (high dose radiation). Many women will have several rounds of brachytherapy as part of their treatment plan. The radiologist will place a ring in the cervix that will stay implanted until all brachytherapy rounds are completed. Personally, I had five rounds and was fortunate that my radiologist put me under for each round, as the procedure is several hours and includes the administering of the radiation and CT scans before and after to check on placement and tumor size. Brachytherapy is very effective when treating advanced cervical tumors that have not spread to any other major organs or lymph nodes. However, it comes with life long side effects that I would have never imagined. 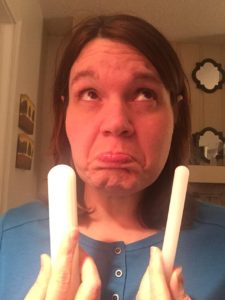 So we all know that radiation shrinks things, right? I mean that’s why we do it, to get rid of cancer. However, while it’s shrinking tumors it’s also shrinking other tissue, like your vaginal walls. Unfortunately when treatment is over, radiation continues to work it’s magic…a blessing and a curse. Many women who have had brachytherapy will be given a dilator at the end of treatment by their radiologist. I will never forget the radiology nurse coming into the room on my last appointment and handing me what looked like a white candle stick. She looked at me very sternly and said, “Use it or lose it!” My oncologist had mentioned prior to treatment that I would need to use a dilator afterwards, but honestly that was a blur. I mean, prior to starting treatment I was a deer in the headlights getting set up for port placement surgery, going to chemo class, getting a chemo doctor, getting set up for radiation, getting a radiologist, etc. So, my gynecologic oncologist did mentioned this, but, I had not given it much thought. Here I was on my last day of radiation, getting ready to have this momentous occasion of ringing the bell, as it was FINALLY my turn, and all I could think about was the dilator.

After treatment, I did okay with using it. My radiologist encouraged using it every other day and to continue using it even if I was having regular sex. He insisted that without stretching the vaginal walls, that the radiation would continue to work long after treatment and the vagina would begin to close. What? I had never heard of anything like this in my life. Of course I went home and googled and sure enough there it was! Why had I never heard of this before? I made the decision then, to get cozy with the dilator because I did not want my vagina to close! Who wants that? 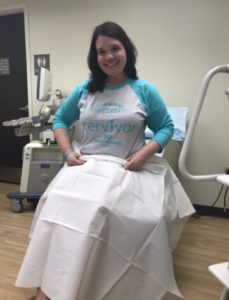 My post treatment scan was positive, there was still cancer present. After taking biopsies to ensure that it wasn’t a false positive, my doctor immediately scheduled a radical hysterectomy. This surgery was coming with potential risks, since I had pelvic radiation just months prior. In spite of the risks, my gynecologic oncologist was adamant that this was my best chance at being cancer free, long term. After the surgery, healing was very slow and I ended up hospitalized with an abscess in the vaginal cuff, on the verge of sepsis. While hospitalized, I had several tests to check on my bladder and kidney function. Most of these included being catheterized, which after all I had been through was really not the worst thing, but definitely not the most comfortable, especially since so much of my pain was in that entire area. The first night I was in the hospital, the nurses missed my urethra while trying to catheterize me. They stuck the catheter it in my vagina instead, right in my abscess. I had felt a lot of pain up to this point, but nothing could have prepared me for this kind of pain! These were nurses who knew me well since I had been in and out of the hospital since my diagnosis, and they felt terrible. I forgave them but, on my gosh, that was some of the worse pain I have ever felt and continues to effect me. 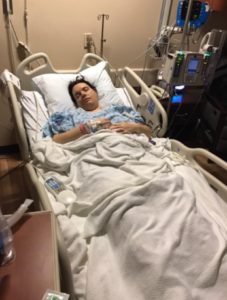 Shortly after being sent home from the hospital, I developed a vesicovaginal fistula. The general public has no idea  what a vesicovaginal fistula is; many individuals who have experience with a cervical cancer diagnosis do not know what this is.  I think it would be beneficial for people to be aware of. The fistula formed between my bladder and my vagina as a result of the receiving a radical hysterectomy post internal radiation. The tissue was not healthy enough to heal properly, especially due to issues with my bladder post-radiation. This resulted in a hole in my bladder, that caused me to urinate through my vagina, instead of my urethra, with no urge “to go,” meaning it was a constant flow. My doctors explained that rushing me off into surgery was a bad idea. She wanted to give my pelvis time to rejuvenate and with a vesicovaginal fistula, urologists want healthy and healed tissue to work with before moving into surgery. What this looked like for me, was 3 and half months in adult diapers every single day. As a reminder, urine is acidic, so having urine go through the vagina and irritating it for three and half months was extremely painful. The surgery to correct this ended up being an abdominal muscle grafted to my bladder, to repair radiation damage. In addition, more of my upper vagina was removed and I had skin from my thigh grafted to replace the radiated vaginal tissue.

Here is where we get back to what my radiation nurse told me, use it or lose it. Due to the radical hysterectomy, complications after, and this surgery, it a year before my gynecologic oncologist gave me the go ahead to start working with the dilator again. After this year, my vagina is so short and small that my doctor has to use an infant speculum for exams! The combination of radiation and multiple surgeries has caused my vagina to nearly close.  The vaginal opening is coming in at a whopping 4cm! She has given me hope that if I continue to work with my extra small dilator, consistently, that I can move up to the small and perhaps even move up from there. All of this depends on me, using it most days, and being consistent. 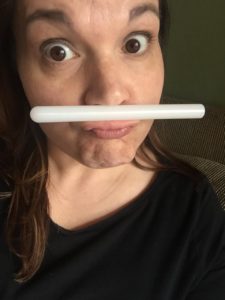 Consistently using my dilator is a struggle. I wrestle with several issues. One, is that I have anxiety about anything going in my vagina at all. It is painful and I have a rational fear of damaging and possibly reversing the reconstruction that saved my bladder. During my last appointment I had a very honest conversation with the physician’s assistant at my gynecologic oncologist’s office, who has been by my side from the beginning. She assured me that enough time has passed that I will not reverse my surgery and that with consistent effort, I can stretch the vaginal opening “some.”  This means we are not sure if it will ever be able to hold an entire erect penis for penetrative sex, but it could get better than 4cm with consistent use.  Using the dilator makes me so anxious that I often skip doing it because I just don’t want to have to deal with it. It’s so overwhelming and can feel like a huge task in my head. So, she helped me to set some realistic goals. I committed to using the dilator three times a week for the next three months, until my next appointment, and reassessing at that time. In order to help with my anxiety, I have some rituals that I have implemented. For example, I like to use my dilator after I shower and feel relaxed and always lying down, propped up on my bed. I also like to watch something mindless to divert my attention from pain and discomfort. (I like to watch New Girl or Fuller House, since we are being totally honest here).

So, what happens if I don’t use my dilator as instructed?  Well, if I give up my vagina closes, and I move on. Truthfully, in some ways that sounds fine with me. I’m kind of done on a lot of levels with this thing. However, deep down I don’t want to give up. I want to at least give it the best shot that I have, to make it better. I know that it will never be “normal.” The hope is that it can at least be better, that is keeping me focused and consistent. 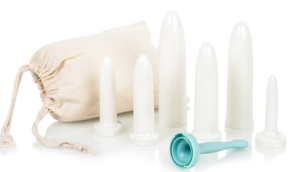 When I tell people about these things and what my reality is after cervical cancer they are usually shocked. Women don’t talk about these intimate issues. I understand that it can be uncomfortable and embarrassing. Up until today, not many people knew that my vagina is 4cm. If we are not bold in speaking about these things, other women suffer alone in silence and a cancer that can potentially be eradicated will senselessly move through another generation. Early detection and prevention are key! The Pap and HPV co-test are wonderful tools that we now have for cervical cancer screening. We know that HPV is ubiquitous and causes most cervical cancers, in addition to vaginal, anal, vulvar, penile, and oral-esophageal cancers. Thankfully there is a safe and effective vaccine to protect males and females, before they are even exposed. I wish that I had known what I know now. I wish that I had heard someone talk about cervical cancer and the importance of screenings, even when you “feel fine.” I wish that I had heard women speak out. I can’t go back and change my experience, but I will work to change it for other women. I will tell my story in order to make a difference for someone else.

9 thoughts on “Use it or lose it – Dilators”