Those 3 words would impact my life in ways I never imagined.

I heard those words in January 2016, which coincidentally is Cervical Cancer Awareness Month. At the time, I was too busy worrying about fighting cancer that I didn’t pause to think why I had never heard of this cancer before.

March 2016 I was declared NED (No Evidence of Disease) and life was supposed to go on, back to normal. What I didn’t realize is that I couldn’t just go back to my life.  Cancer had happened and I was not able to move past it. One night I came across a blog about a group called, “Cervivor” and I was intrigued by the name. I started following them on Facebook where I saw a post about an upcoming Cervivor School and they were awarding limited travel scholarships; I submitted my application for a travel scholarship and I waited. I remember thinking that my story was not special enough or I wasn’t sick enough to earn a spot at this school. Thankfully, Team Cervivor felt differently about my story. 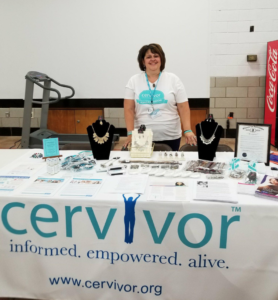 One of the impactful things that happened during Cervivor School was the final morning.  All of the attendees were handed a sheet of paper with the following:

One thing I feel comfortable doing to advocate is: and I wrote “Like the Peyton Project for bullying I am going to crochet teal cancer ribbons and put them in public places with hashtags #CervicalCancer #Cervivor #DontFearTheSmear #CervicalCancerAwareness #CervivorAdvocate #MakePapAPriority”

When I got home, I went through my suitcase and pulled out the paper, I photographed it, and shared it on my Facebook.  I wanted it as a way to hold myself accountable. I still have this sheet of paper and I look at it every day on my desk.

I started a project to meet this goal: Operation Teal. I started out getting my ribbons crocheted, labeled, and distributed from Illinois.  Today these ribbons have been reported as far as Rwanda, England, Canada, Bahamas, South America, and Greece. Operation Teal has been very well received! Many people requested ribbons to help spread awareness for cervical cancer; many of these individuals had never heard of cervical cancer unless someone close to them were diagnosed.

This project was a lead into my active advocacy. I took my Facebook account from a page about my life to a full on cervical cancer awareness page. So much so that I believe people wanted me to start posting about my dogs in their outfits again, it is about finding a balance. People was told I would get tired of talking about cancer. Well, I didn’t and I couldn’t go back to posting just cute pictures. You see I had met women and put faces to cervical cancer; many women, including Erica, Sarah, Cemonia, Lauren and Tamika and each one of them had an effect on me. I was so moved by their stories, I knew I had to keep talking about this cancer no matter what because they matter. . . I matter. 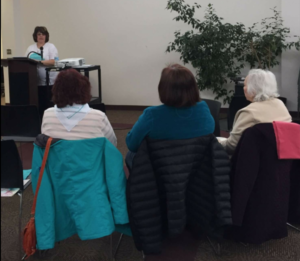 Late 2016 and all of 2017 was all about advocacy from almost daily Facebook posts, proclamations from the Illinois governor, speaking at two Cervivor Schools, co-hosting events with my oncologist, news interviews, an ongoing jewelry fundraiser for Cervivor, and helping other women who were diagnosed with cervical cancer either online or in person. One interview with a local hometown newspaper was picked up by the Associated Press! I was invited to be a part of The Woman to Woman peer mentoring program. I was honored to have been asked to be a part of an advisory board as a patient advocate with the University of Chicago Medicine.

One of my most treasured moments of 2017 was while I attended Cervivor School, Delray Beach, Florida.  I was awarded the Cervivor Champion Award. I was completely speechless, and had no idea that when Tamika Felder, the founder of Cervivor, was speaking about the recipient, that it was me.  I never thought of myself as a champion. When I first started talking about my cancer story, I was doing it to help myself. It was very therapeutic to finally be able to talk openly about the chapter in my life called cancer. 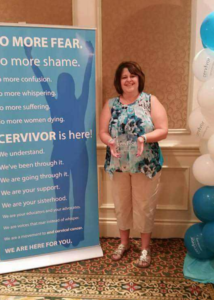 Honestly, I cannot even believe all of this happened in such a relatively short time; it is just crazy how such a horrible event in my life and being a Cervivor School scholarship recipient changed everything for me. I am forever grateful to Cervivor. I don’t believe any of this would be happening had it not been for Cervivor! What started out as “I have to let my friends know this can happen to them”, has turned into so much more.

I do what I do because it is important to talk about and raise awareness for a cancer that in the U.S. alone takes the lives of 4,000+ women annually. So many people have never heard of this cancer; myself included and I want to change that. Did I want to be an advocate? Hardly. I was such an introvert and guarded person before cancer and Cervivor. I was a person afraid of public speaking and I certainly was not a person who could talk openly about my vagina and sex!

I have learned so much about myself and I know my WHY. That WHY drives me every day to talk about cervical cancer, raise awareness, and make impactful changes in the lives of the women I meet. I do what I do so no one else has to hear those 3 words. Today we have the knowledge and a cancer prevention vaccine that can eradicate this cancer. I feel very strongly that, as a Cervivor Ambassador, it is my duty to share what I know and to help others.

Paulette Apostolou resides in Illinois with her loving husband and two rescue Min Pins. She is the owner/designer of ThePartyDeeva.com and founder of Operation Teal; an awareness ribbon campaign she started in 2016 after attending Cervivor School Louisville. Contact her at  paulette@t0g.ce7.mywebsitetransfer.com. She is available for speaking/advocacy events.  #WeAreCervivor

April 15-21 is National Volunteer Appreciation Week. As an organization rooted in volunteerism, Cervivor wants to say “Thank You” to the amazing people who make our community possible! Our volunteers are dedicated to the prevention and early detection of cervical cancer, and most of all, they understand the power of our Cervivor stories.

Our Cervivor Ambassadors and volunteers are spread far and wide. You’ll find them 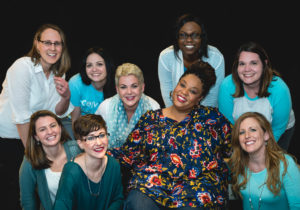 in the District of Columbia, New York, Maryland, Virginia, North Carolina, South Carolina, Georgia, Texas, Florida, Tennessee, and everywhere in between! Our volunteers are constantly working to reach women through community events, intimate gatherings, public service messages, and one-on-one communication. They understand our collective commitment to ensure that not one more woman suffers or dies from cervical cancer. Simply put, our Cervivor community could not exist without them.

Cervivor is a community, a learning tool, an advocacy resource, and an online retreat for healing, connecting and thriving. None of this would be possible without the dedication of our ambassadors and volunteers. Today, we thank them and celebrate THEM! Happy National Volunteer Week! We’ll be posting more photos of our wonderful volunteers on our social media pages this week. Be sure to check it out.

Also, click here to learn how to get involved and spread the word.