I recently learned that April 8-14 is Minority Cancer Week. It’s funny how just over a year ago, finding this out wouldn’t have meant much to me. I mean come on, there is a week, a month, or a day for every cause you can imagine. There is even National Hot Dog Day! However, as an African American woman who has fought the battle, having an awareness means more to me than I ever thought it would!  Cancer has attacked six of my close family members and taken the lives of four of them…most under the age of 65. 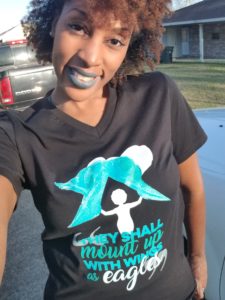 In January of 2017, at the age of 33, I was diagnosed with cervical cancer…the youngest of my family with a cancer diagnosis. When preparing for treatment, the standard family medical history questions came up. That made me realize just how devastating cancer had been to my family.  Once treatment was over, I decided to share my diagnosis with the general population. It was crazy and scary to me how many other women had dealt with this same disease.  Since my diagnosis, I have met several other women of my ethnicity who have also been diagnosed with cervical cancer at some point in their lives.  Once I began to research, I saw that statistics show that African American women are diagnosed more, are at higher risk,  and even die more often. I knew that I had to do something in my community to make women like myself more aware!

After sharing my story time and time again in my salon, I realized just how little most women know about the causes of cervical cancer. Many women do not even know the difference between a pap test and a well-woman exam, or that we can have pre-cancer before actually having invasive cancer, or how the recommended screenings are part of cervical cancer prevention! In my case, I missed one year…just one visit with my gynecologist. That was just enough time for my cancer to advance to stage 2b. What if I had not skipped a year of screening? What if I had known the symptoms and had gone to the doctor when I first experienced simple symptoms? What if I knew more to begin with? I want to stop the “what if’s” in my community…..that is what fuels my advocacy for cervical cancer awareness and prevention!

Angeline is a Cervivor from Lake Charles, LA. She will be attending her first Cervivor School in Cape Cod, MA in September and has submitted her Cervivor story to be added to our site.