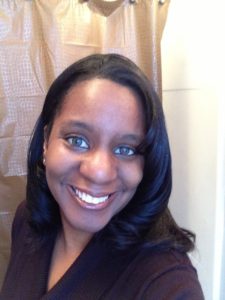 Who would have thought I would make it to my 17th Mother’s Day and be cancer free? Answer: my son.  I was diagnosed with stage 1b1 squamous cell cervical cancer a few weeks before Romeo was going to turn 7.  How do you tell your six year old that you have cancer? How would he react? Could he handle something like that at such a young age?

I remember telling him on the day I was diagnosed.  I got out my physiology and anatomy book and turned it to the page showing the woman’s reproductive organs and asked him to come sit with me on the couch.  I explained to him that I was sick and that I had cancer.  He had seen commercials and movies where people had cancer so he understood what I was saying.  I pointed to the picture and explained to him about where it was and how the reproductive system for women is the place where babies grow.  He then said, “Does this mean you won’t have any more babies?” I remember smiling sadly at him and saying, “I think so.” And then he asked the question that I think most children would ask.  “Are you going to die Mom?” My immediate answer was “No.” I never even thought about the fact that I could die.  He then said “I’m sorry Mom.” and gave me the sweetest hug.  I think many people go through the five stages of grief when they find out they have cancer.  Denial, anger, bargaining, depression, and acceptance.  I skipped the first four stages and went straight to acceptance.  I never asked, “Why me?” I simply thought “Why not me?” Cancer ran rampant in my family so the probability of me getting cancer didn’t seem far-fetched.  I’ve been getting my Paps since I was 16 and have never had an abnormal Pap. In early 2007 I’d had a normal pap and didn’t experience symptoms until around October and November and I faithfully had my doctor check me multiple times and nothing was there. The end of January 2008 my boyfriend, now husband noticed blood after intercourse so I knew something was wrong.  That Monday I was going to the doctor to have moles removed from my right breast and I asked them to check again.  I’ll never forget that day.  As she examined me she said “There’s something down there” and I was like “My NuvaRing?” and she shook her head and said there was something else.  She went and got my gynecologist and he told me to just relax and breathe and hold still.  I felt him pull on something and I felt liquid.  They took whatever it was out of the room and had me sit up.  When I sat up I was sitting in a small pool of blood.  He told me there was a mass that wasn’t really attached to anything and he was able to remove it and they were going to send it for testing stat and that he would see me on Friday.  The wheels of my mind had already started spinning and for some reason, the word cancer floated through my mind.  That night I went to the American Cancer Society and put in my symptoms and cervical cancer popped up.  For some reason, I knew that’s what it was without an official diagnosis yet.  On Friday I went back to my gyno and he asked to examine me one more time.  After the examination, he looked at me and shook his head and said. “Minus the small lesion on your cervix, I would have never thought you had cervical cancer.” He shook his head again and said “We checked you multiple times last year and it wasn’t there and all your tests were negative” He then gave me a big hug and said, “We’ll send you to Iowa City and most likely you’ll need a hysterectomy.”  Since I went on ACS’s website earlier, I already knew that was one of the choices that I would have to make.  I did not want a hysterectomy! After all, I was only 32 and I had always dreamed of having a little girl after I had Romeo or twins even.  I wanted to have another child so badly that I carried around this cute picture of these twin babies from a Pampers ad that I saw in my wallet.

Flash forward to the University of Iowa Hospital and my oncologist giving two options: remove just my cervix (radical trachelectomy), or a radical hysterectomy where they would keep my ovaries and fallopian tubes.  My oncologist stated that the chances of the cancer coming back in the first five years would be higher if I had the trachelectomy.  There was no mention of options to preserve my fertility at all.  It was either or.  I even told him why my mom and my husband was there that I did not want the hysterectomy but by going by what he said, that seemed to be the best option.  I remember signing papers saying that I knew I was giving up my reproductive rights.  That was probably the second time I cried during my whole journey.  Romeo never showed that he was scared, even when my parents argued with him that he was too young to go to Iowa City for my surgery.  He insisted on going and I wanted him to go.  He wanted to be there for me and I was so thankful.  He kept me centered.  He kept me calm.  He was my rock.

On March 27, 2008, I had my surgery.  I remember him saying “Ma I love you and I’ll see you when you wake up.”  I hugged him and the rest of my family and they took me back.  The doctors asked me if there were any questions and I remember telling them honestly that I was terrified of the surgery.  I was shaking so bad that my teeth were chattering.  They reassured me everything would be ok and they gave me something to help calm me down a little and they gave me an epidural for the first time since I didn’t have one with Romeo and I remember them laying me on the operating table still shaking and me saying I couldn’t feel my lower half and then being put under.  When I came to, the first thing out of my mouth was “I want to see my family.”  As soon as I saw him I squeezed him as hard as I could without causing myself more injury.  We did it! I was now cancer free! The healing process was long and hard but Romeo and Matt were by my side.  Romeo pushed me around Walmart in a wheelchair when I couldn’t walk anymore!  When I talked to my general practitioner, she said she had tested me for HPV and it was negative.  To this day I get an HPV test and every single one of them has been negative.  After I found out that there was a vaccine that could guard against cancer-causing HPV, I immediately talked to my son about it.  After explaining to him about the majority of cervical cancer cases are caused by HPV and that there are other cancers caused by it, he asked to be vaccinated.  I was so proud of him.  A few years ago I asked him how he felt when I was diagnosed with cancer and if he thought I was going to die.  He said he was scared that I might but since I never acted like I was going to die, he wasn’t really worried.  Funny enough, my mom said almost the same thing.  I seemed strong to them even though I never felt like I was.If anyone can take anything from my story I would like to say this.  You know your body better than anyone else.  If you know something is wrong, keep having them check and if they won’t, find someone who will.  Talk to your children honestly and explain to them the facts of HPV and the cancers it causes and about the vaccine.  In regards to fertility, go with your instinct.  It was devastating to make the choice that I made because no one talked to me about fertility options and I wish someone had because my choice would have been completely different or I would have had my eggs preserved.  Ask questions! You are your best advocate!  My son is now 17 and will be a senior in the fall and I treasure the fact that I can still celebrate Mother’s Day with him and watch him grow.

Shondria is a 10 year cervical cancer survivor and resides in East Moline, Illinois with her husband and son. She will be attending her first Cervivor School in Cape Cod this September.