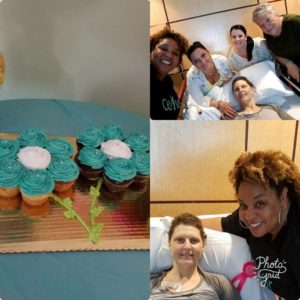 The last time I saw Jillian was last year on her birthday. It wasn’t joyous. I think we all tried to make it joyous, but it was quite sad. Jillian was in hospice and she was nearing the end. I plotted with her friends and family to surprise her, and surprised she was.

I had never been to hospice before. Despite all the work I do in the cancer community I had never visited someone in hospice. I don’t know what I was expecting, but whatever it was that is not what I saw. In fact, it was just the opposite of anything I think of what “in hospice” would be like. Jillian’s hospice was beautiful. It was serene and everyone was friendly. It didn’t feel of death. Until I walked in and saw Jillian. There she was, sitting in her bed looking like Jillian, except she was very pale and her hair was darker. She was also quiet. Something that Jillian was not.

When she saw me walk into her hospice room, she looked as if she had seen a ghost. In some ways; I assume I looked that way too. I sat in a chair on the side of her bed. She reached out to hold my hand. Her hand was cold. My hand was warm. Jillian kept stroking my hand with hers and she looked intently at me. She kept commenting how warm I was. I’m always warm. My cold friends are always snuggling up to me and soaking up my warmth. Normally, I don’t mind, but this time I felt so uneasy about it. Perhaps because I could see the inevitable in her eyes. Perhaps she could see that reflection in mine. Perhaps because I so desperately wish I could fix it. Or perhaps it’s because we both knew this would most likely be the last time we saw each other — and it was. But that won’t be my final memories.

I’ll remember what an outspoken advocate she was. I’ll remember her telling me from her hospice bed that the work I do is important 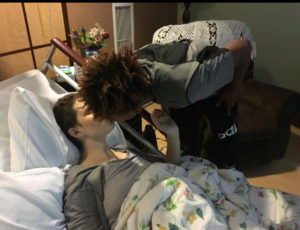 and to keep it up. With so much death it can be hard to keep doing this work. But that is exactly why I can’t give up. Via social media I watch as Jillian’s friends, family and boys go on without her. At times it is painful and I have to keep scrolling. But this is why the elimination of suffering and death due to HPV related cancer — especially, cervical cancer has to keep pushing forward. The time is now. I’ll continue this work not only for Jillian. But for Curtissa, Nanette, Lisa and so many others, too. It’s what Jillian would have wanted. It’s the only birthday present that I know she would want. Happy Birthday, Jillian! You are missed.

Tamika Felder is a women’s health advocate, educator, mobilizer, author, and the Chief Visionary at Cervivor, a nonprofit dedicated to cervical cancer advocacy and support.

HELP NEEDED! The CDC wants to help prevent women from developing cervical cancer. As survivors, we have been invited to share our stories through an online survey. Results from the survey would be used to recommend changes that could improve access to care for other women.

Thanks in advance for your participation!