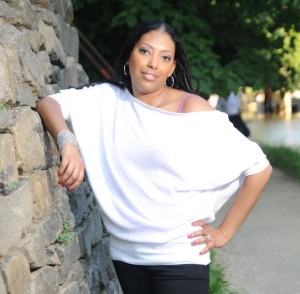 In June 2010, I went to see my OB–GYN just like I do every year, but this appointment would be unlike any other. I got a phone call a few days after my appointment telling me that I needed to come into the office to speak to the doctor about my results. I knew something had to be wrong. I was diagnosed with Adenocarcinoma-in-situ and was completely blindsided.

How did I get here? I’m only 28 years old, I told myself, I can’t have cancer. I felt fine. I didn’t feel like I had cancer and I didn’t look like the people on television who had cancer, therefore the doctor had to be wrong. I’ve never missed any of my annual Pap smears, so how could I have cancer? Cancer happens to people who smoke, and drink, and don’t take care of themselves. I can’t have cancer, that wasn’t a part of my plans. I was told that I would need to go and see a gynecologic oncologist for treatment.

I arrived at the oncologist’s office on August 12, 2010, and as I sat in the waiting room it started to feel real. I was called back to meet with the doctor and she told me that I would only need to have a cone biopsy and then everything would be just fine. I was scared to have surgery, but more scared of what would happen if I didn’t. I felt like she was very knowledgeable and I agreed to her treatment plan and we scheduled my cone biopsy for August 20, 2010.

Following the surgery I took it easy and tried not to stress about the “C” word. I was even able to find a great book written by a woman diagnosed with cancer at a young age as well. It really helped me make it through the days until my follow-up appointment. When that day came, I arrived at my appointment ready for good news, ready to leave this nightmare that I had been living for the past few months. Unfortunately, that wouldn’t be the case. The oncologist informed me that they weren’t able to remove all the cancer, and the biopsy results on the tissue that was removed showed Adenocarcinoma Stage 1. After I heard those words I began to cry. I couldn’t stop thinking, “Why me? Will I have to have chemotherapy and radiation? Am I going to die?”

She began to tell me that she wanted to perform this radical new surgery on me, but I may not be able to have any children afterwards. Next she started looking through her calendar, trying to schedule this surgery for her next available date which happened to be my birthday! I was completely overwhelmed and I left her office and sat in my car and cried. When I got home that night I began to do some research, which landed me an appointment at Johns Hopkins Medical Center for a second opinion.

I met a wonderful oncologist who looked over my medical records and actually sat down and listened to me. I discussed with her how important it was for me to preserve my fertility as well as remove the cancer, and she agreed. She didn’t feel that I needed the radical surgery the previous doctor suggested, only a repeat of my original surgery. On November 12, I headed into surgery for the second time. The wait for the results began once again and it was killing me! I couldn’t sleep and I could barely eat. Finally December came and I headed to Baltimore to find out my results. I sat in the exam room for what felt like an eternity, until the doctor finally walked in. She paused for a moment and then said, “We got it all.” In disbelief I asked her for a copy of the report. She laughed and then handed it to me and gave me a big hug as I sobbed. Words could not express how relieved I felt.

As the holidays came, I hoped that I would be too busy to think about what I had gone through. Unfortunately I was wrong. It was strange, even though I knew all the cancer was gone, I still couldn’t get the thought of “what if it isn’t gone” out of my head. I felt like cancer was some sort of stalker – I was constantly looking over my shoulder for it to come back and get me. What happens if I go back for my three-month follow-up and the cancer is back? Did I just put myself through two surgeries for nothing? I made a conscious effort to keep my thoughts happy, but some days it was just so hard to keep myself from having negative thoughts. I know that I was extremely lucky that my cancer was detected early because if it wasn’t, I don’t know where I would be today. I think that has been the most difficult part for me. Knowing that there are so many other women who went through much more than I did, or didn’t survive at all, and knowing that I’m alive and doing well sometimes makes me question why was I so lucky. I was also lucky to find support through online chat rooms, and having the ability to connect with other women with similar stories. These “Survivor Sisters” gave me advice, words of wisdom and encouragement that got me through many sleepless nights.

Since my diagnosis almost five years ago, I’ve been pretty busy. I got married in October 2012 and in January 2014 I was able to give birth to a beautiful baby girl. I continue to have regular follow-up appointments with my Oncologist, and as it stands today, I am still cancer free! Cancer is a part of my life and as much as I would like to pretend it isn’t, I can’t, but I still consider myself extremely lucky. I tell everyone about my story because if I can convince just one woman to make sure that she gets her annual Pap smear exam, then I feel like I’ve accomplished something great. I want women to know how important early detection is and even if they receive a cancer diagnosis, that they have to advocate for themselves! Make sure they get a second opinion and that they are comfortable with the doctor and the treatment plan because your doctor is your partner in this fight!

One thought on “Be your own advocate: It’s okay to get a second opinion”