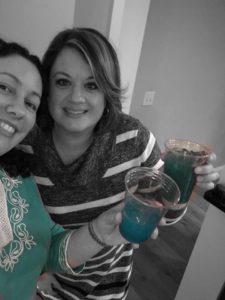 A few months ago I started planning for what would be my “coming out” party so to speak.  Kind of like a debutante coming out to society, I wanted the world to know that I had cervical cancer caused by HPV.  Wow that felt so good to type.  The event was planned for January during Cervical Cancer Awareness Month and the idea was simple, have a few close family and friends over to hear my story, watch the movie Someone You Love: The HPV Epidemic and answer any questions.  I had no idea how much of impact this event would have.
So let me rewind a little bit and tell you what brought me here and my “why”.  In 2009, I heard those three awful words, “you have cancer”.  I had cervical cancer and it was a result of HPV 16 and 18.  What is that you ask? HPV is the human papillomavirus and there are more than 100 types of HPV and just a little more than a handful are high risk or cancer-causing.  HPV 16 and 18 cause about 70% of cervical cancers.
When I was first told I had cervical cancer I had no idea what that meant.  I had no idea what HPV was.  More importantly, I didn’t know anyone who had or was going through what I was.  It was extremely lonely.  Not only could I not relate to others, I had family members who associated HPV with a stigma and told me things like it was because everyone sleeps around.  That hurt beyond imagination.  I was silent about HPV.  Someone I looked up to made me feel like I did something wrong.  But I didn’t, they were just ignorant.  At the time I did what I do best, I went to the bookstore to find anything that may help me.  8 years later, 1 LEEP, 2 cone biopsies, an infection that almost killed me, 11 lymph nodes removed, and a hysterectomy I have finally found my voice to tell my story, I discovered “my why”.  I have finally found the courage to talk about HPV.

That brings me to my event, my “coming out” so to speak.  There were about 15 people in total that included family, friends, and neighbors.  Most everyone there had children ranging from around age 7 to their early 20s.  To make the evening more special I was honored to have Tamika Felder, the founder of Cervivor there by my side; and I was honored to have Kelly there representing Team Jillian.  Jillian is a Cervivor sister we lost this past September and I love that her close friends and family honor her by continuing to talk about cervical cancer and the HPV vaccine. 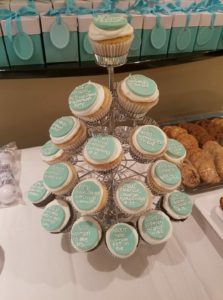 I could not have asked for a better evening, we even had a teal cocktail made by the very awesome Justin who was sporting a teal shirt.  Before the start of the movie, I gathered everyone
around to make a few comments and tell my story.  It was the first time I did this to a group.  I was so nervous, but once I started talking it was so easy.   I believe it was said in Cervivor School, no one knows your story better than you.   My best hope for the evening was that I would tell my story and we would watch the movie.  My goal was getting me over the nerves hurdle with people I knew.  But wow my goal was exceeded.  At the end there were questions.  There was interest.  There were women who were ready to go back to the doctor.   Moms who wanted to share the information with other moms in our community, people who were happy their kids had the vaccine, but they didn’t understand at the time how important.  Knowing that I was able to reach someone with my story, for me this was most definitely a tiny spark that had lit a mighty flame.
January is Cervical Cancer Awareness Month – there is still time.  Are you ready to have your “coming out” and share your story?  Cervivor is a great place to share your story and it has an easy to follow format which can guide you.
— Cervivor Amassador Tina Vetreno
Read more about her story here: https://cervivor.org/stories/tina-2/